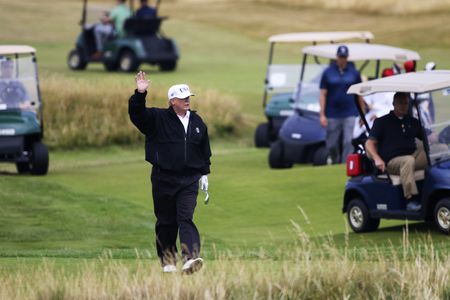 The
@PGA
, set to hold 2022 PGA Championship at
@realdonaldTrump
‘s Bedminster, on his racist tweets:
“As an organization, we are fully committed to Diversity and Inclusion, but we are not a political organization & simply don’t weigh in on statements made in the political arena.”
10:01 AM · Jul 16, 2019 from Washington, DC·Twitter Web Client

The PGA had a decision to make regarding the site of its signature event, the 2022 PGA Championship, following President Donald Trump’s racist tweets aimed at minority freshman Congresswomen over the weekend.

Trump National Golf Club in Bedminster, is set to host its first PGA Championship, but golf’s governing body has come under scrutiny following the President’s outburst.

Trump tweeted over the weekend:

So interesting to see “Progressive” Democrat Congresswomen, who originally came from countries whose governments are a complete and total catastrophe, the worst, most corrupt and inept anywhere in the world (if they even have a functioning government at all), now loudly……

….and viciously telling the people of the United States, the greatest and most powerful Nation on earth, how our government is to be run. Why don’t they go back and help fix the totally broken and crime infested places from which they came. Then come back and show us how….

….it is done. These places need your help badly, you can’t leave fast enough. I’m sure that Nancy Pelosi would be very happy to quickly work out free travel arrangements!

Tuesday, the PGA issued a response to the tweets, apparently signaling that the organization has no plans to move next year’s championship.

“The PGA of America is excited to begin a new chapter of major championship history by taking two of our premier championships to venues that bear the Trump label of excellence,” PGA Chairman Ted Bishop said in a statement in May, 2014.

As buildings across the country have moved to remove Trump’s name from their facades since his election in 2016, revenue at the President’s golf venues has also declined, according to a report from the Washington Post.

President Trump was in attendance at Bedminster when the club hosted the 2017 US Women’s open, which was won by Park Sung Hyun. Likewise, according to Trump Golf Count, Trump has spent 61 days at Bedminster since being elected President.